The numbers don’t lie, the Echo Dot is the leading smart speaker in terms of sales. It’s not hard to understand why either. You get all of the features that the larger and more expensive Echo speaker provides at a fraction of the cost. Which I think is a sign that the people who buy these smart speakers aren’t always that bothered about the sound quality. Preferring to listen to music on a dedicated system like Sonos or simply finding the Dot good enough for more casual music.

The Dot is certainly perfectly good for things like podcasts and Alexa’s own vocal needs. It’s the most cost effective way to cover your home with smart speakers.

So it’s should not be surprising that Google is rumored to be working on a smaller version of their Home speaker.

On 21 August 2017 tech outlet Android Police published an article claiming that Google would be planning on bringing out a smaller version of the Google Home that was released in November of 2016.

Android Police cite “an unnamed source” so everything we hear until an official announcement is nothing more than hearsay. Anything could happen from now until then or the information could simply be dead wrong. So look at everything about this rumored product from that point of view for the time being.

Home Is Where the Hearts Is

When Google launched the first home near the end of 2016 reviewers had a fair amount of praise for the actual hardware. The Home is a stylish speaker and works quite well on a technical level. Google’s biggest problem with their smart speaker really comes from the software that drives it. It’s not that the Google Assistant is bad or anything, but compared to polished systems such as Alexa it doesn’t quite feel like it’s there yet.

The thing is, you’d be a fool to bet against Google lightly and with a solid hardware platform, I have no doubt that the search giant will have the features and polish coming thick and fast over the next few months.

All the Small Things

The current Google Home speaker stands at about 14 cm tall and weighs around half a kilogram. The Echo 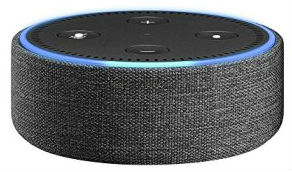 Dot is approximately 10 cm shorter than the Home, so if Google is intent on bringing a competitor to the market they’re really going to have to take a hatchet to the Home as it stands.

It took Amazon a while to figure out what can be downsized and what needs to stay upsized with the Dot, so it’s not surprising that we’re only hearing about a possible Dot competitor almost a year after the Home shipped.

Then again, Google has a history of working with some of the best hardware partners in the business. Products like the Pixel and Nexus are top-tier hardware wise, even if some of them never quite reach the sales numbers to truly play with the big dogs.

Given that Google has no doubt dissected a bunch of Dots in the name of science, I would be worried if I were Amazon. There’s a real chance here that a mini-Home will outdo the Dot on a purely technical basis.

Bringing out a smaller, cheaper Amazon Echo competitor is definitely the right move on the part of Google, but will it be enough to start making a dent in Amazon’s dominance? The real change that needs to happen on Google’s side of this fight is software-based. Google Assistant itself is a bit of a miss if you ask me. While we have Cortana, Siri, Alexa and now Bixby, Google has chosen to leave their voice assistant without a personality or identity.

Time will tell if that’s an important factor or not, but I suspect that the future of smart AI voice assistant will have way more personality. We humans are social creatures and will probably feel more comfortable with a digital persona that fits in with the sort of people we’d like to chat to. So I’d like to see Google address the blandness of their assistant and perhaps be the first to sell custom personalities for it, rather than one universal personality the way that Alexa or Siri works today.

In the end, using the Google Assitant today is just not as user-friendly and satisfying as using Alexa and Google will have to fix that sooner rather than later, or it won’t matter how good their hardware ends up being.

This smaller Home speaker will also be entering a much more crowded space than Amazon had to deal with when it first launched the Echo. Rather than trying to compete, Amazon had the luxury of virtually creating the product category and setting all the rules.

It’s inevitable that any new entrants to the market are going to be compared to the Amazon ecosystem that Alexa is part of. That hasn’t stopped the march of competition, however. Right now we have Siri on the Apple Homepod and now Samsung’s Bixby on their phones and soon a confirmed Samsung smart speaker.

Samsung has already made Bixby available in more than 200 countries and don’t forget that Galaxy smartphone numbers are massive. Google has the advantage of their assistant being grandfathered in with Android itself, but that advantage didn’t play out too well for (as an example) Microsoft’s Internet Explorer. So you can’t rely on that as an ace in the hole.

In the end, competition is better for us as consumers, since it will drive these companies to make their products, both hardware, and software, better and cheaper. The only real issue in the short term is fragmentation and a lack of standards. It’s VHS vs Betamax or Blu Ray vs HD DVD all over again. Which means third-party smart home brands need to get their inter-operability ducks in a row too.

Multi-room Audio: How To Fill Your Home with Sound