IFTTT is great for simple home automation and getting your apps to work together but it is severely limited for anything that requires more than one step.

It can also be unreliable at times and forget to “fire” when you need it most leaving you out of luck.

Here are 5 IFTTT alternatives that allow you to create better home automation routines and integrate all of your apps together. 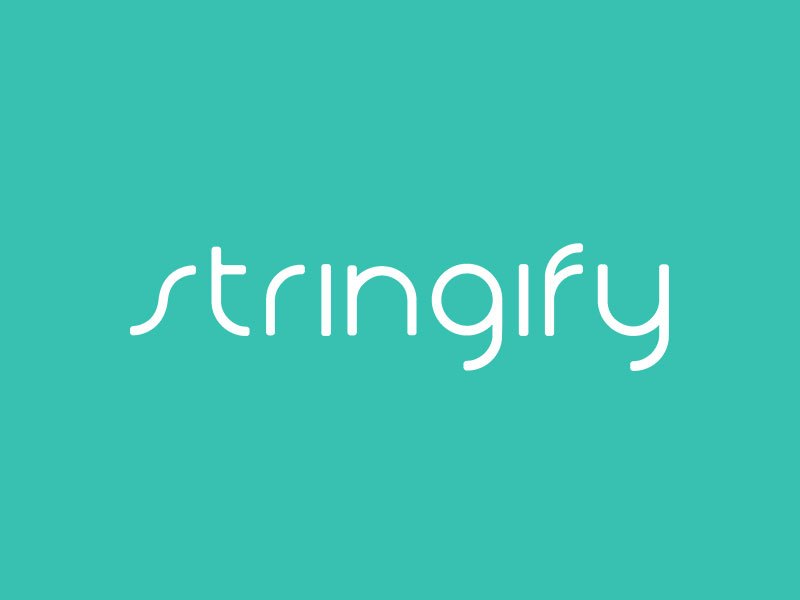 The biggest problem with IFTTT is that it only allows for one trigger at a time. You can easily turn your lights on automatically when you get home but what if you want to also unlock the door, turn on the tea kettle and play some music?

You’d have to create multiple triggers and hope that they fire on time. This can be tedious and time consuming, depending on what you’re trying to accomplish.

Stringify allows you to create “flows” where you can easily accomplish whatever you want in a simple interface.

You can setup anywhere from two step flows like turn your lights off at 10pm or something more complicated like this.

2. Then blink my LIFX Color living room lamp red and play a custom message over the living room Sonos, saying “It’s now bedtime kiddo’s. Let’s get to bed and get some sleep”…

3. Then turn on the boys’ LIFX Color lamp to yellow at 10% brightness and play music on their Sonos….

5. Then turn off the boys’ LIFX Color lamp and pause the music on their Sonos. 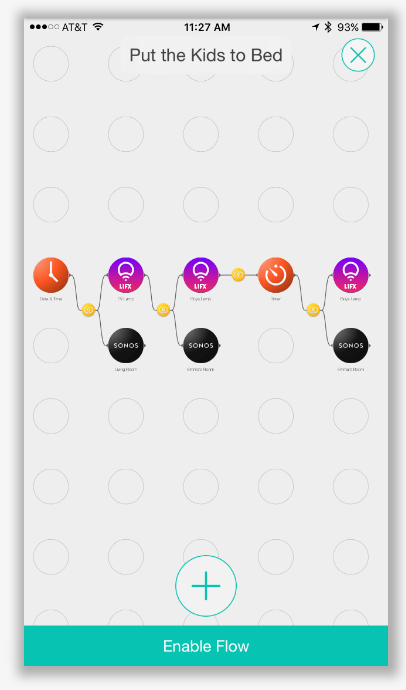 You have the flexibility to create any routine you want but they have a list of possible combinations in the flow ideas section of their site.

The downside to stringify is that it doesn’t support as many devices as IFTTT. It for example doesn’t currently support the belkin wemo smart plugs and switches which is a real bummer because I have 4 wemo switches that I use for my smart home.

According to their website they are constantly working on supporting more and more devices like the wemo so in the near future it may have exactly what you’re looking for.

Its also only currently available for iOS and doesn’t have a web interface like IFTTT. They are working on an Android App and you can sign up for the beta here. 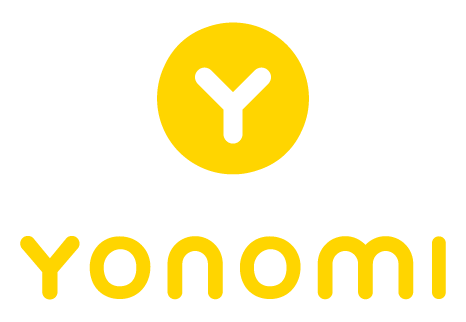 While it doesn’t have the pretty “flow” interface, Yonomi works with many more devices than Stringify and it also has an app for Android.

Yonomi is the app that I personally use because it works with my Wemo smart plugs and the Harmony universal remote hub.

I have many routines setup like “TV Time” where it turns off all my Wemo switches, turns on the hue lights in the TV room and dims it down to 20%. 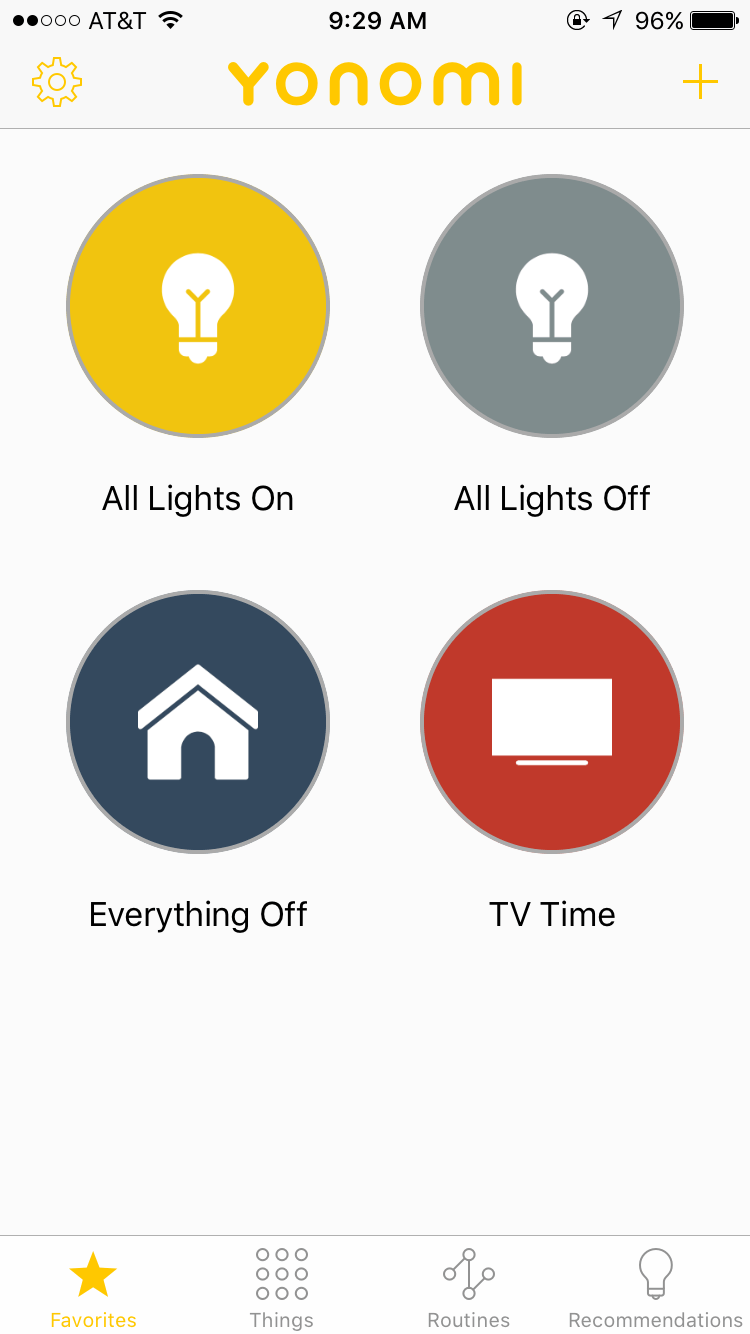 4. Turn on the porch and bedroom light

6. Turn the thermostat to 68 degrees

7. Turn on the music in my bedroom for 20 minutes and then turn it off

8. Wait 5 minutes and then turn off the bedroom light

Now I just say one command and it all happens like magic. Awesome!

The downside to Yonomi is that it doesn’t support every device. Ecobee and the new Google Home being the two major ones. I’m sure they’re working on it though.

Like Stringify it also runs through the internet so there can be some lag from the time that you issue the command and you see everything happen but in my experience it’s much faster than IFTTT.

There are a lot of smart home hubs on the market like wink, smartthings, etc.

The advantage to smart hubs is that they run locally on your network instead of on the cloud making it faster and reducing the lag time from command to action. Also, if the internet is down IFTTT won’t work at all.

If you’re a programmer and like to tinker, hubs like smartthings offer an unlimited amount of variations and combinations that you can create.

I use the Logitech Harmony Hub in my smart home because it comes with an IR blaster which allows me to turn on and off my television. This is something that I can’t accomplish by just using Stringify, Wink, IFTTT or anything else.

It also allows you create routines and has support for 240,000 devices.

You used to have to set up IFTTT or Yonomi to connect your Amazon Echo to the Harmony Hub but there is now a skill that you can install for direct access without 3rd party software.

As time goes on we will see less and less of these smart hubs because the Amazon Echo and Google Home are going to support many of the functions that they do without having to get the extra hardware.

This is pure speculation but I can see one of those companies buying Yonomi or Stringify and integrating its functionality directly into their apps. 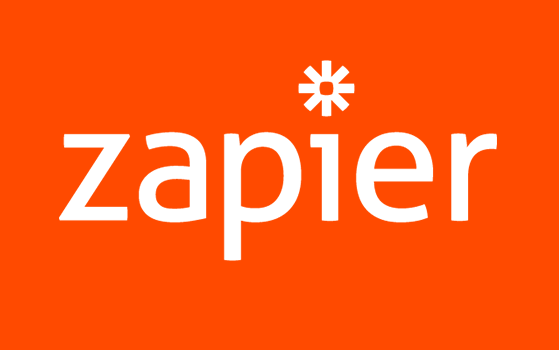 Stepping away from the home automation side of things, Zapier is a great IFTTT alternative if what you are looking for is app integration.

Zapier boasts over 500 different apps that it can connect to verses IFTTTs 270.

Zapier is more for the business or power user as it creates multi-step triggers or “zaps” to accomplish a massively long list of possible tasks.

It can integrate just about any business application you have from mysql databases to Quickbooks online to project management systems like basecamp.

If you own a business, Zapier is a must as it helps you run your operation more efficiently and saves you a ton of time.

The downside is that it isn’t free. It costs about twenty bucks a month depending on your plan but if you want to check it out and make sure it’s right for you it does have a “Free Forever” option with limited functionality to get you started.

It also doesn’t have an app so you are limited to using a PC or Mac to setup and run the tasks.

Microsoft has thrown their hat into the app integration arena with it’s new “Flow” cloud service.

Being a Microsoft product, it’s geared toward OneNote, Office 365 and their other tentpole brands.

It only supports 35 services right now but expect that number to grow.

With Flow you can automate things like creating a to do item inside Wunderlist when you get an email that’s marked important.

It’s free right now and if you want to get in on the ground floor you can check it out at Microsoft’s dedicated Flow website.

With these 5 IFTTT alternatives you can create multi-step automation tasks for your smart home or business duties.

They are also, in many cases more reliable and have less lag time than IFTTT. Enjoy!

How To Secure Your Netgear Router In 5 Easy Steps